Artemisia - Roast Goose, the Green Fairy, and the Nobel Prize: Digressions on the Topic of Solubility

Human use of the plant “Artemisia” has a long tradition - whether used as spice in a heavy meal, as a medicinal product against malaria or as an ingredient of the once notorious absinthe. 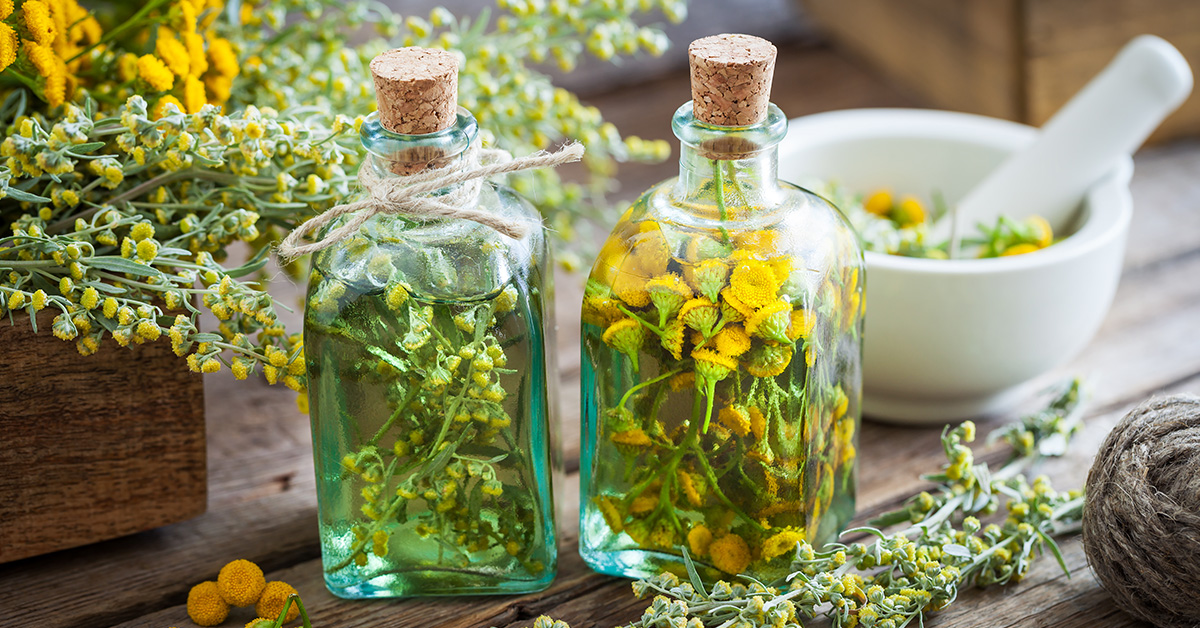 When families get together for Christmas dinner in Germany, many who follow tradition will serve roast goose seasoned with mugwort. The bitter compounds contained in this plant have an appetizing effect and aid digestion, particularly of rich and fatty foods. But the use of mugwort (Artemisia vulgaris) is far more ancient than the local custom of serving goose on Christmas Eve (and on St. Martin's Day in early December). Early Neolithic relics already include indications of the use of mugwort and it is assumed that the Teutons and Celts also used this variety of artemisia as a medicinal and magical plant [1]. In many regions of Central Europe, mugwort was attributed magical powers, it served as a medicine and, until into the 18th century, was used in cooking as frequently as parsley is today [2].

However, mugwort is not the only member of the daisy family that has become a widely cultivated plant. A glance into the German classic “Hagers Manual of Pharmaceutical Practice” [3] yields 21 entries on artemisia varieties used as culinary or medicinal herbs, for instance tarragon (Artemisia dracunculus) or wormwood (Artemisia absinthium).

The latter has gained some renown, not only, like its sister plants mugwort, southerwood, and tarragon, due to its use as a herb and a drug. It is also the main ingredient of a notorious alcoholic beverage: absinthe. This high-proof spirit was first manufactured from wormwood, anise, fennel, and other herbs in the Jura region of Switzerland during the late 18th century and its use then spread rapidly, particularly in France. The “green fairy,” as the liquor was known due to its color, soon advanced to a cult drink, inspiring numerous artists, authors and painters to immortalize it in text and image form.

Excessive consumption, however, frequently led to impaired consciousness, hallucinations, and memory loss. The explanation for these symptoms was that they were induced by the effects of the active ingredient thujone, a neurotoxin that is a constituent of essential wormwood oil. Virtually insoluble in water, this compound was extracted from the absinthe plant by the high alcohol concentration during manufacture of the liquor and entered into the drink in harmful quantities as a result. Vincent Van Gogh's self-mutilation under the influence of absinthe was regarded as a cautionary example. Back in the 70s, the author of these lines was still told during a keynote lecture on pharmaceutical chemistry that the Pointillist painting style only came about because the impressionist painters were incapable of drawing a continuous line owing to the neurotoxic effects of thujone. To curb the rampant abuse of the beverage, known as “absinthism,” the popular spirit was finally banned internationally in the early 20th century, no doubt much to the "secret satisfaction" of the winemakers and brewers.

The above comments on the enrichment of water-insoluble substances in non-aqueous solvents are certainly apt to our topic. The medieval alchemists had already realized that: “Similia similibus solvuntur,” in other words, like dissolves like. Hydrophilic (“water-loving”) substances dissolve well in water and to a certain degree also in short-chain alcohols such as ethanol. In the case of lipophilic substances (those soluble in fat or in organic solvents such as acetone, longer-chain alcohols, or petroleum ether), in contrast, the addition of water to a solvent mixture reduces their solubility. This results in precipitations or phase separation, a process known as the Louche effect. To some readers, this may bring to mind memories from some Mediterranean vacation, of the milky cloudiness that forms in Pastis or Raki when water is added.

Incidentally, whiskey connoisseurs who add a few drops of water to their “dram” are putting a similar principle to use: The lipophilic aromatic substances are enveloped less effectively by the alcohol solvent as it competes with the water. They therefore concentrate at the boundary surface of the liquid, where they transition more readily into the gas phase. The whiskey “opens up” and the aromas are perceived more intensely; clearly also an interesting topic for chemical science [4].

Very similar issues arise in the development of pharmaceuticals and their packaging, as well as during their use by means of applicators and devices: Medicinal preparations are frequently in close contact for lengthy periods with materials containing potentially soluble substances that are not intended to migrate into the product or reach the patient. One example are plasticizers or polymerization catalysts, which can penetrate into medications as “extractables or leachables.” This risk must be ruled out using suitable pilot experiments. The specialists in Pharma Services at Harro Höfliger will be happy to provide further details and advice in this regard.

For the sake of completeness, it should be added that the ban on absinthe was lifted again in 1981, with a maximum permitted level of thujone in force since that date. Moreover, modern analyses of old absinthe samples have shown that the thujone content was lower than assumed and that, in all likelihood, it was ultimately the high concentration of alcohol in the drink that caused absinthism [5].

Finally, I would like to report on a further member of the artemisia family, which has very quietly begun to achieve great success far from our western society: Artemisia annua or sweet wormwood. This variety has been in use in China for 2000 years, but scientific research into the plant only began in 1967 as a secret project initiated by Mao Zedong. Called “Project 523,” its aim was to support China's partner state North Vietnam in developing an antimalarial drug. For this purpose, more than 2000 plant extracts were tested and, finally, an effective extract was obtained from Artemisia annua and its active principle identified. Researcher Youyou Tu was awarded the Nobel Prize for the discovery in 2015. In her Nobel lecture, she gave an impressive account of the development of artemisinin [6]. Since 2005, the WHO has recommended an artemisinin-based combination therapy (ACT) for the treatment of malaria.

Here, once again, the question of an extractant and the solubility of the active ingredient crops up because artemisinin is poorly soluble in water. As a result, a heated debate was held as to whether traditional tea preparations should be used to treat malaria. Although these are unrivaled in terms of price and are easily available, the active ingredient concentration can vary significantly. This poses the risk of resistance developing if the malaria pathogens are not exposed to sufficiently high doses of the active ingredient.

The current coronavirus pandemic has incidentally also once again brought Artemisia annua into the focus of medical and pharmaceutical science. This is because, in vitro, extracts and individual active ingredients from this plant block propagation of the COVID-19 virus and are therefore being tested in studies with regard to their suitability as an antiviral drug [7].

It thus seems that Artemis is well-meaning toward humanity.